What is Rhythmic Gymnastics? 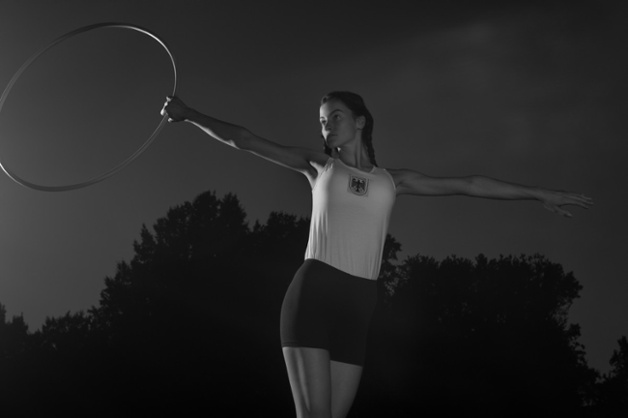 Gymnastics is a well known sport that pairs strongly with the summer Olympics events that occur every 4 years and not to be confused with the winter Olympics which occurs every 2 years. Rhythmic Gymnastics is a woman-only event that challenges all their senses, every muscle fiber and mental focus to execute their performances gracefully and elegantly! Girls of many ages compete, we train the girls with our best Rhythmic coaches. The days we teach are on Mondays, Wednesdays, Saturdays and we are opening for Sunday!

Gymnastics has been a grand sport since the ages, the U.S. joined in the 70s and Rhythmic gymnastics rose to be integrated in the olympics and be adored by the world in the 80s.

Rhythmic Gymnastics consists of a floor to do their performance and a series of events, each being a performance of different equipment. In the end, their results are summed up for an overall score known as an All-Around score.

Information of each equipment were attained from here.

The ball must be made of rubber or soft plastic, with a diameter of 18-20cm. It must weigh at least 400g.

The ribbon is a single 7m strip of ribbon made from satin or a similar material. One metre of its length is folded and doubled so it may be attached by a cord to a cylindrical stick 50-60cm in length which the gymnast grasps. The ribbon must stay in perpetual, fluid motion throughout the routine.

Gymnasts work with two bottle-shaped clubs of equal length, 40-50cm, and resembling a slender tenpin bowling pin in shape. Made of wood or plastic and weighing at least 150g, the clubs have a wide end (the body), a tapering middle section (the neck), and usually a ball on the end (the head) with a maximum diameter of 30mm.

The hoop may be made of wood or plastic, with an inner diameter of 80 to 90 centimetres. It must weigh at least 300 grams. Performances must include at least three leaps.

The rope, made from hemp or a similar material, has no set length because it is relative to the height of the gymnast. Performances must include at least three leaps.

Buzzfeed released an article of Rebecca Sereda interview, a silver medalist of the 2014 Olympics, on her perspective of Rhythmic Gymnastics.

Her perspective of Rhythmic Gymnastics is explained by how it may be misunderstood or perceived incorrectly to be questioned as a sport. It isn?t a sport of frolicking or just women having dance routines. Top competitors of the sport perform with techniques, timing and challenging executions with each equipment. To elaborate or give a better example, here is a video compilation of a few great performers in rhythmic gymnastics.

We have our own winners who are aiming beyond the sky's (and not limited to), Champions of the So-Cal State Championship 2016. WE HAVE TWO Awards of the Year!

The video below is a bit of a sample to the dedication and difficulty in the sport of Rhythmic Gymnastics.

The sport is far from being a joke (let me emphasize the distance? FAAAAAAAAAAAAR) or dared to be stated as ?an easy sport?. If you read Rebecca?s interview, her challenge is the 6meter ribbon. Making it elegant without flaw or mistake to make knots.

LASG offers Rhythmic Gymnastics for all girls who have the passion, dedication and focus to tackle this sport and achieve feats not many could. Many enter and LASG is proud of each of them who keep trying and enjoy doing it. Majority go the distance in the championship. below are some of the lots who compete. LASG recreational rhythmic gymnastics learning the fundamentals on how to work with clubs, ribbons, ball and free-exercise. Always having fun,fun fun!

One of the LARGEST events we have annually is on January called the LA Lights!

The Tournament of Champions! Where we feature the top athletes in the world!