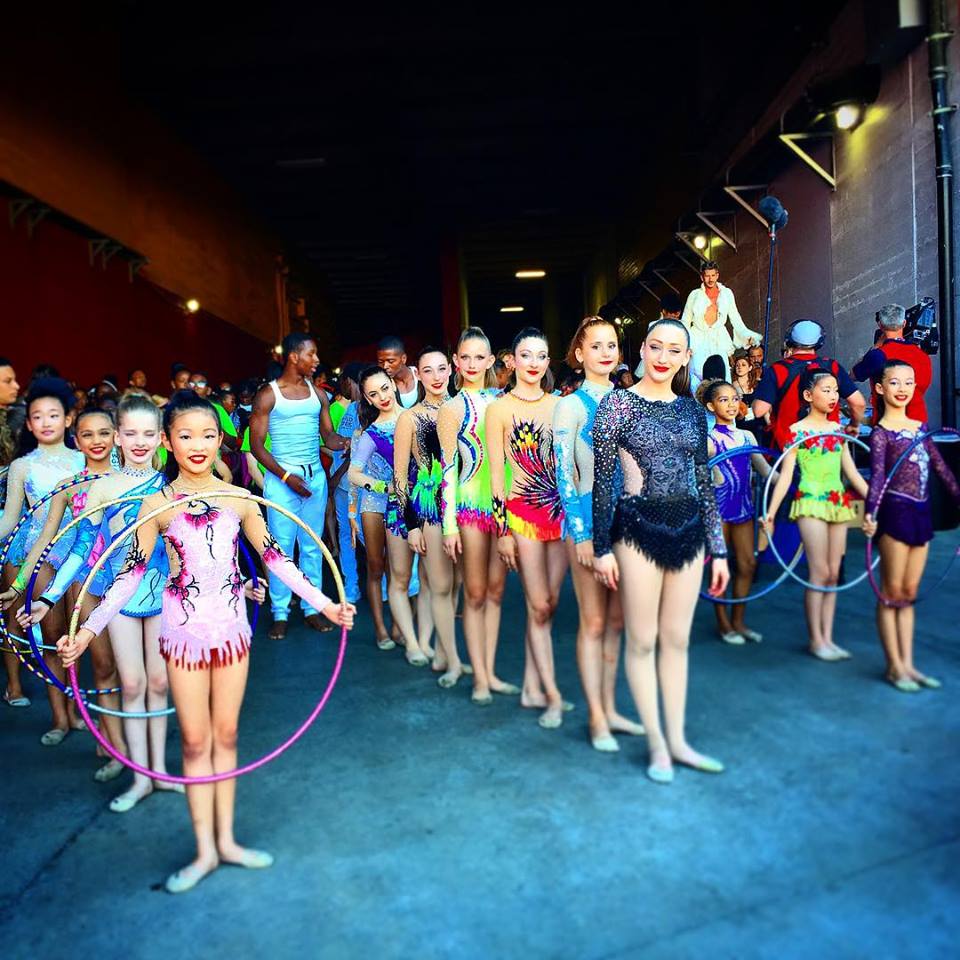 On Saturday, July 25th, the Los Angeles School of Gymnastics team of national-level gymnasts stepped onto the red carpet of the LA Coliseum to lead the 2015 Special Olympics Opening Ceremony as over 7,000 of the world?s most inspiring athletes came from 165 different nations came to celebrate the commencement of the 2015 World Games. (Center) Coach Boyko with LASG Girls Team before the Opening Ceremony of the 2015 World Games.

Following an introduction by President Barack Obama in front of a crowd of 62,388, the Los Angles School of Gymnastics team of 30 of its best athletes kicked off the event as they tumbled down the red carpet on live television, trailed by world-class stilt walkers.

Alongside performers such as Stevie Wonder and Avril Lavigne and appearances by Michelle Obama and Jimmy Kimmel, LASG?s general manager Tanya Berenson told, ?The World is coming to Los Angeles, but we are bringing to the world LA?s ?Dream Team?, a collaboration of Award-winning choreographer, Debbie Allen, and Olympic history-changing Coach, Mrs. Alla Svirsky together for another historic performance, combined with the world?s leading performers, comedians, and spokespersons.?

The 2015 World Games is the largest event held in Los Angeles since the 1984 Summer Olympic Games, where Los Angeles School of Gymnastics? own Executive Director Mrs. Alla Svirsky was inducted as the 1st Olympic Coach for the sport of rhythmic gymnastics and led the 1984 USA Team to a historical win.

Mrs. Svirsky still holds to this very day, the highest-ranked US Rhythmic gymnast in Olympic history. ?I recall walking into the very same stadium in 1984 leading the 1st Rhythmic Gymnastics Team for the United States as it was inducted into the Olympics that year, and my team performing at the Coliseum almost 30 years later with much fanfare is really exciting? ? says Svirsky, a USA Olympic Coach, Olympic Judge, and Inductee to the Sports Hall of Fame. LASG Boys Team at the 2015 Opening Ceremony at the LA Coliseum. Photographed by Coach Darryl Thompson.

Named by Los Angeles Magazine as the ?best gymnastics center in LA,? the LASG is a nonprofit Olympic-quality gymnastics training center dedicated to providing the highest level instruction possible to all of its students.

Home to its nationally recognized Special Education program and proud partner of the Special Olympics as well camps and classes for all ages coached by the best instructors in the country, it is considered among the top facilities in the country since its inception in 1975.

Hurry as supplies are limited!