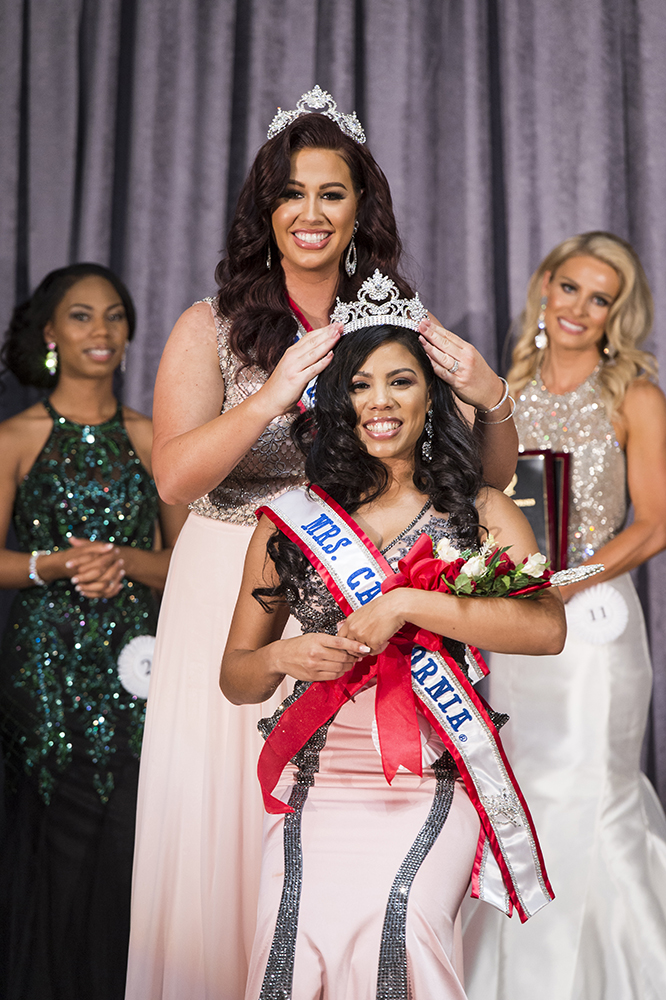 Our state?s newly crowned queen Mrs. California 2017, Kristi Eddy, is on her way to the Mrs. America Pageant? and is regularly at LASG getting ready for her debut on national television as she graces the stage of Mrs. America?.

Kristi never participated in a pageant prior to this year?s Mrs. California America Pageant?. She says her hard work and preparation which lead to a crown is a testament to her life of achievement through adversity.

Kristi grew up in San Pedro, CA, was raised solely by her mother and without any siblings. When her mother realized that she had a severe case of neurogenic stuttering which often times left Kristi in tears and rarely socializing at school, she decided to sign her up for ballet at age four. Hoping this would help Kristi socialize with other children her age release some energy, her mom found herself looking for more active sports that fit their very small budget. ?I remember going to the church food pantry a couple of times and constant financial issues? she recalled.

Despite her athleticism and decades playing sports, Kristi?s true passion for the sport of gymnastics was something that was a mere dream which started back in 1995.

When she was eight years old an after school gymnastics program came to her school. She was able to attend a couple classes, but it just became too expensive. It was that brief moment in gymnastics that made her fall in love with the sport. She recalled watching every moment of the Magnificent 7 at the 1996 Olympics on her Channel 2 through 13 television and begging her mother to record every part of the competition on VHS tape. ?I wanted to be the 8th member of the team? she said.

Unfortunately, the closest she was able to get to gymnastics was doing the splits in the hallway and handstands next to her bed. Between 1996 and 2005, Kristi continued playing multiple sports, but there was no soccer medal or new fastest time in track that could deter her dreams of gymnastics. It was in late 2014 that Kristi?s goal of doing gymnastics became a reality. That summer she attended her first class at Los Angeles School of Gymnastics and she has been attending ever since. She regularly attends classes with Coach Jason and says that she wishes she had been able to participate in gymnastics as a child. ?Gymnastics teaches you to pursue your goals, get up if you fall and keep going, and to never ever give up.

You never know when you will get that new skill or have that perfect landing and those are the best life lessons?. As a high school Assistant Principal, Kristi brought what she learned at LASG back to her students in Watts by leading a gymnastics enrichment class between 2015 and 2017.

?Growing up I had to push through a speech disorder and getting teased very often. I feel like gymnastics builds that inner confidence at a young age and would have helped me have a strong sense of self?. Her favorite thing about LASG is the Special Education Gymnastics Program as Kristi herself overcame her speech disorder through special education services and knows the value of such support.

Kristi?s love for gymnastics and consistent Adult Classes with Coach Jason put her in top fitness shape to win the title of Mrs. California 2017 and she is working hard to learn new skills and stay in shape before she leaves for the Mrs. America Pageant? which is taking place in Las Vegas on August 26, 2017.

To learn more about Kristi and her journey to Mrs. America, you can visit her website www.mrscalifornia2017.com or follow her on social media @mrscalifornia2017 where she often posts her gymnastics progress. If you attend Los Angeles School of Gymnastics our state queen is in Jason?s class Thursday evenings and Saturday afternoons practicing her round-off back tucks, front walk overs, and flexibility.