A History of Gymnastics 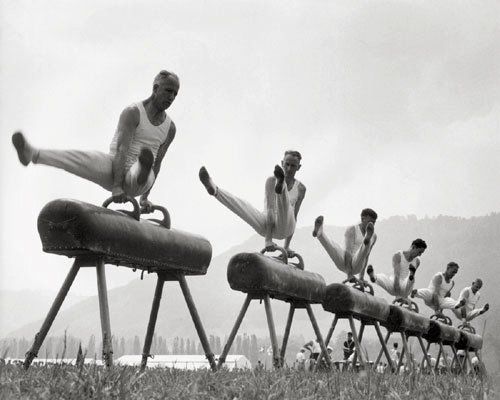 Do you want to know more about the history of gymnastics and how it came to be one of the greatest sports around? Check out this article from encyclopedia.com. You are sure to learn some interesting facts that you never knew before?

Gymnastics is the practice of athletic exercises for the development of the body, especially those exercises performed with apparatus such as rings, pommel horse, bars, and balance beam. Although gymnastics was likely practised in ancient Egyptian and Chinese cultures, its roots for Western culture lie in ancient Greece, hence the derivation from the Greek word gymnazein, which literally means ?to train naked? (gymnos: naked). The early Greeks practised gymnastics in preparation for war, as jumping, running, discus throwing, wrestling, and boxing helped produce the strong, supple muscles necessary for hand-to-hand combat. Because military training was necessary for the production of Greek citizens, and because the Greeks viewed the training both of the body and the mind as inextricably linked, gymnastics became a central component of ancient education. Gymnasia, the buildings with open-air courts where such training took place, evolved into schools where youths learned gymnastics, rhetoric, music, and mathematics. Gymnastics also provided a way to train for the athletic festivals around Greece, the most famous of which was the Olympic Games, held every four years from 776 bce until 393 ce.

With the end of the Olympic Games, Greek-style gymnastics training declined, not to be revived until the eighteenth and nineteenth centuries in Western Europe. With this revival came a concomitant revival of the corporeal values associated with gymnastics: upper body strength, musculature, elasticity, litheness, flexibility, poise, and equilibrium. Underpinning the re-emergence of gymnastic training is the same assumption held by the Greeks, that a healthy body and a healthy mind are intimately connected.

In the mid 1800s Friedrich Jahn did much to re-introduce gymnastics into German education and became known as the ?father of gymnastics?. Jahn introduced the horizontal bar, parallel bars, side horse with pommels, balance beam, ladder, and vaulting bucks. His gymnastics program was promoted in Turner societies, clubs established to develop self discipline and physical strength in the name of national unity. In Sweden, Pehr Henrik Ling followed closely behind Jahn, systematizing Swedish pedagogic gymnastics with a strong emphasis on the medical benefits.

In the early nineteenth century, educators in the US imported German and Swedish gymnastics training programs. With the American integration of gymnastics into the general education curriculum, its connections to nationalism and military training re-emerged stronger than ever. By the early twentieth century, the armed services published drill manuals featuring all manner of gymnastic exercises, drills which, according to the US Army Manual of Physical Drill (1910), provided proper instruction for ?a body of young and active men? and were thus ?all important?. The US Navy?s Gymnastics and Tumbling, published in 1944, asserts that ?Gymnastics and tumbling contribute in large measure to the demands of a democracy at war.? Nonetheless, as military activity moved away from hand-to-hand combat and toward fighter planes and contemporary computer-controlled weapons, gymnastics training as the mind/body connection, so important for the Greek, German, and Swedish educational traditions, began to lose force. As a result, physical and intellectual training in schools are now almost completely separate; although in Germany the term ?gymnasium? still persists as the term for a place of secondary education, the gymnasium is more commonly cordoned off for physical training, while the privileged intellectual education takes place in traditional classrooms. The mind/body split is more pervasive than ever.

In the early nineteenth century, educators in the US imported German and Swedish gymnastics training programs. With the American integration of gymnastics into the general education curriculum, its connections to nationalism and military training re-emerged stronger than ever.

The nineteenth and twentieth centuries saw the powerful emergence of a strand of gymnastics, similar in form to gymnastic training for educational and military purposes, but practiced for different ends. The first Modern Olympic Games in 1896 featured competitive gymnastic events for men, which have been included in every Olympics since. Men?s gymnastics events are scored on an individual and team basis, and presently include the floor exercise, horizontal bar, parallel bars, rings, side horse (also called pommel horse), vaulting, and combined exercises (the all-around), which combines the scores of the other six events. Combined exercises for women were first held in 1928, and the 1952 Olympics featured the first full regime of events for women. Women?s gymnastics events include balance beam, uneven parallel bars, combined exercises, floor exercises, vaulting, and rhythmic sportive gymnastics. Olga Korbut, Nadia Comaneci, and Mary Lou Retton have helped popularize women?s competitive gymnastics, making it one of the most watched Olympic events as they performed difficult maneuvers on some of the very apparatus developed for bodily training by Friedrich Jahn in the eighteenth century.